[SAMURAI ZOROYE] is popular among a wide range of people as it has all the necessary items for coordination set up and is a basic line that is easy to handle even for beginners. In order to make the [SAMURAI ZOROYE] line even more comfortable to wear, the design has been completely redesigned as [SAMURAI ZOROYE] ver2. [SAMURAI ZOROYE] ver2 pursues a simpler way of wearing by simplifying the front body and front straps of the Hakama and improving the back plate, and has evolved more practically. In addition, the ability to tie the hem (Ninja style) has been added, making it much more mobile.

The [SAMURAI ZOROYE], which was upgraded by adding new functions, has been well received by users since its launch, and was almost sold out in the previous announcement. Please enjoy the total coordination of HAKAMA-SHIKI.

[Samurai-Zoroye] is a basic three-piece set of Hakama, Dougi and Obi.

The [Samurai-Zoroye] series has all the items necessary for a samurai style set up, and is also the most basic starter set of Hakama-Shiki. Samurai-Zoroye consists of three parts: patented Hakama, easy to wear and move Dougi, and easy to tighten Obi. Each item is designed with our shop's unique ideas so that anyone can wear it easily. By making dressing as simple as possible, you can easily enjoy authentic Wafuku (traditional japanesefashion) in various scenes. There is a video of how to wear on YouTube and you can check it anywhere in the world. In addition, the upgraded [[Samurai-Zoroye ver 2] has a function to tie the hem (Ninja style), making it even more mobile. 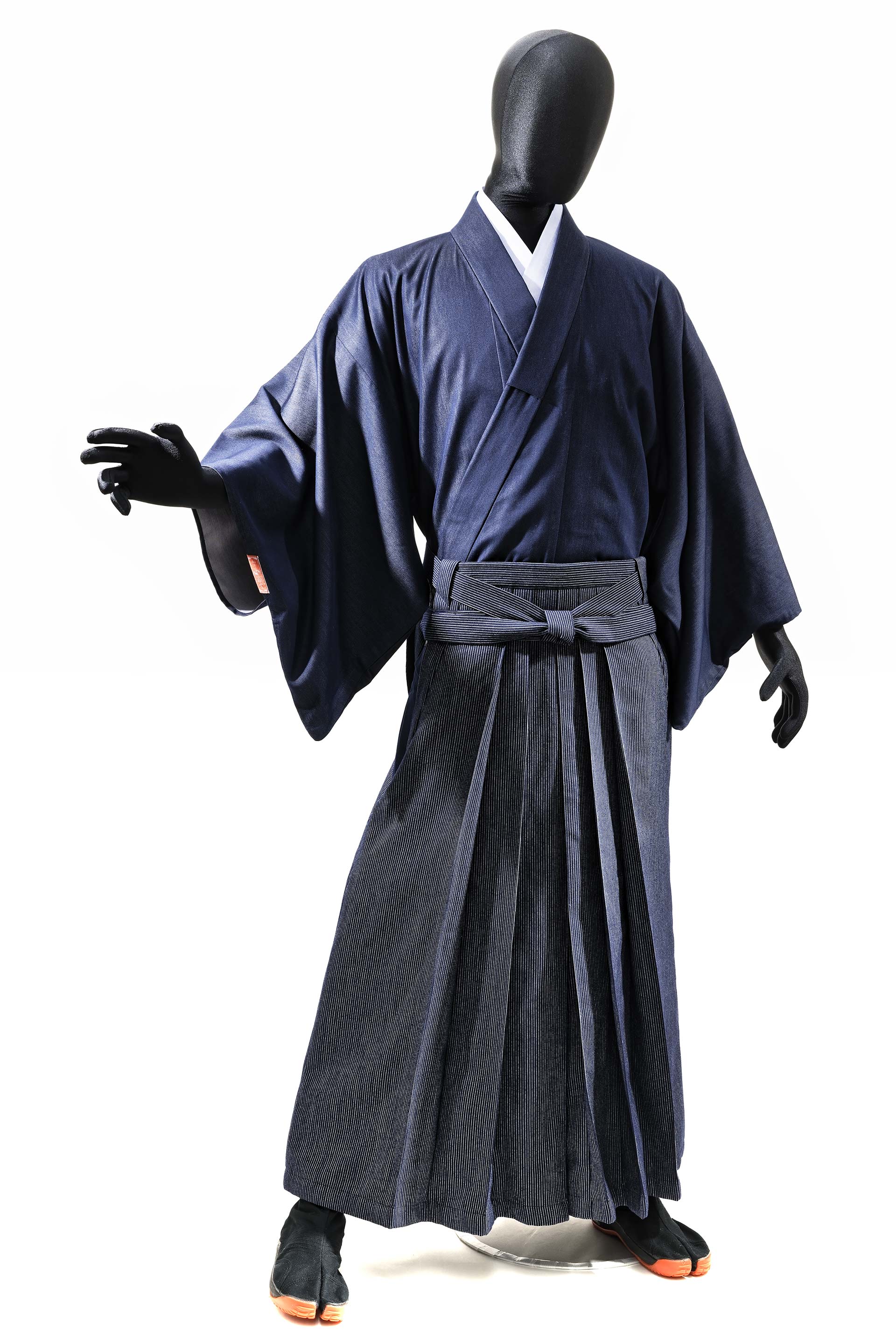 A neat coordination with dark-blue Dougi and dark-blue pin-striped Hakama.

Hakama, which has fine white pinstripes on dark blue, is made of a blend of wool and polyester, and is characterized by a light fit and supple texture. It looks plain from a distance, but it has a smart look with the white pinstripes woven into it. The slightly simple texture is also popular. When the hem is tied up "Ninja style", it gives a masculine look with beautiful folds.

And the slightly shiny dark blue Dougi is easy to handle and flexible. This is an almighty item that can be used not only for daily wear, but also for formal occasions, thanks to the texture of cotton mixed with nylon, etc. As a whole, it is a modest and orthodox combination, but with the pinstripe of Hakama and the luster of Dougi, it is chic and elegant.

In addition, the feature of SAMURAI-ZOROYE is that the Dougi comes with a detachable inner collar to make it easy to wear. Wear it with a navy Obi that peeks from the side for a sharp look. 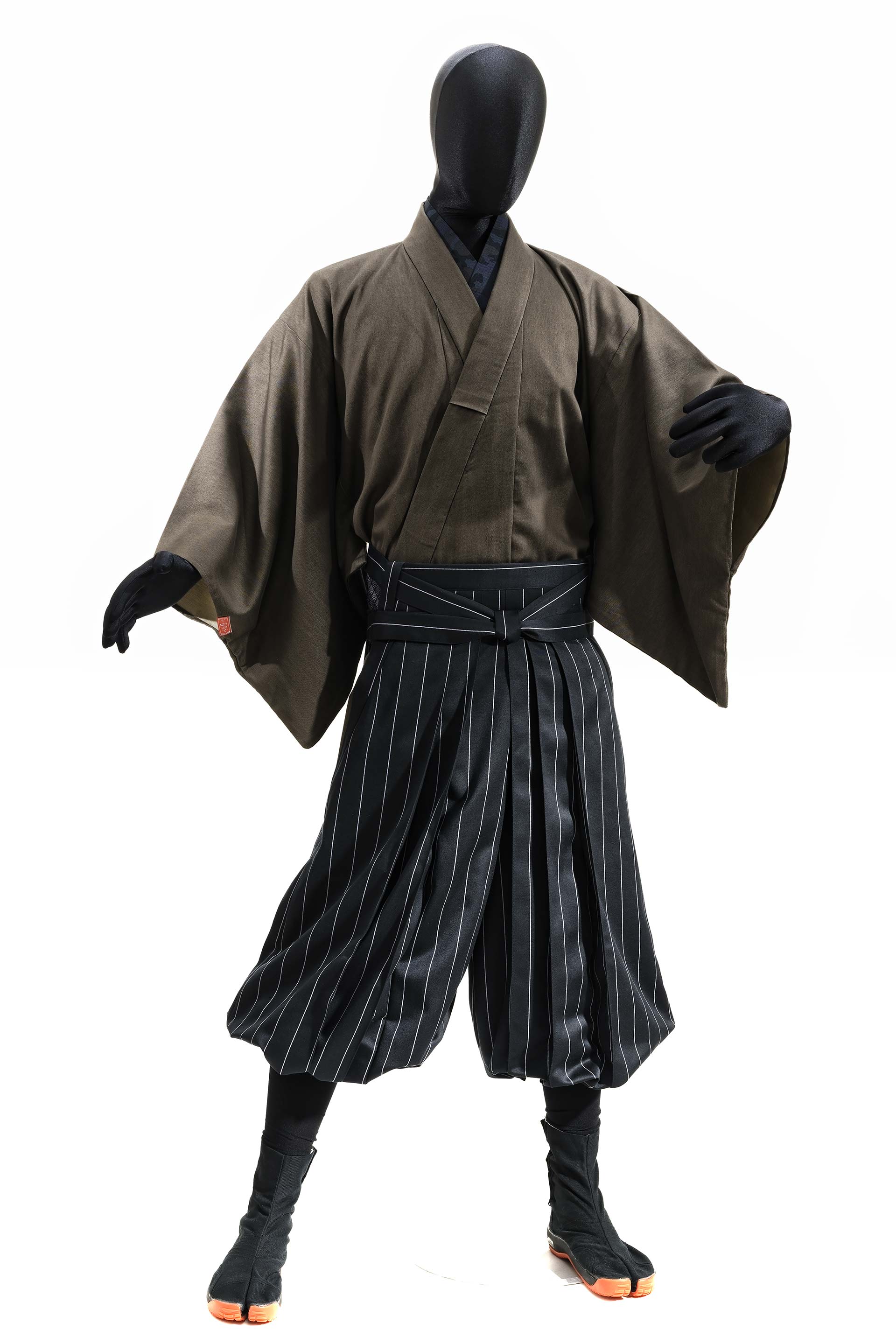 This SAMURAI-ZOROYE is coordinated modernity by with Hakama with sharp white stripes on black and Dougi with supple khaki color.

The striped black Hakama is avant-garde. In addition, the luster is also good. The traditional silhouette does not hide the modernity of Hakama. Of course, it has a supple and easy to handle texture. Since this item is made from a lustrous fabric, if you make it into a "Ninja style" with the hem tightened, it will bring out the beauty of the shape.

The khaki color Dougi is slightly glossy and elegant. Made of comfortable cotton blend fabric with a supple texture. The subdued and simple color of Dougi brings out the modernity of Hakama. It has an intellectual atmosphere as a casual wear. The black camouflage pattern on the collar is a detachable inner collar attached to the Dougi, which increases your enjoyment.

The deep blue Obi harmonizes the sharp Hakama with the calm Dougi. It's actually a 4-piece set. 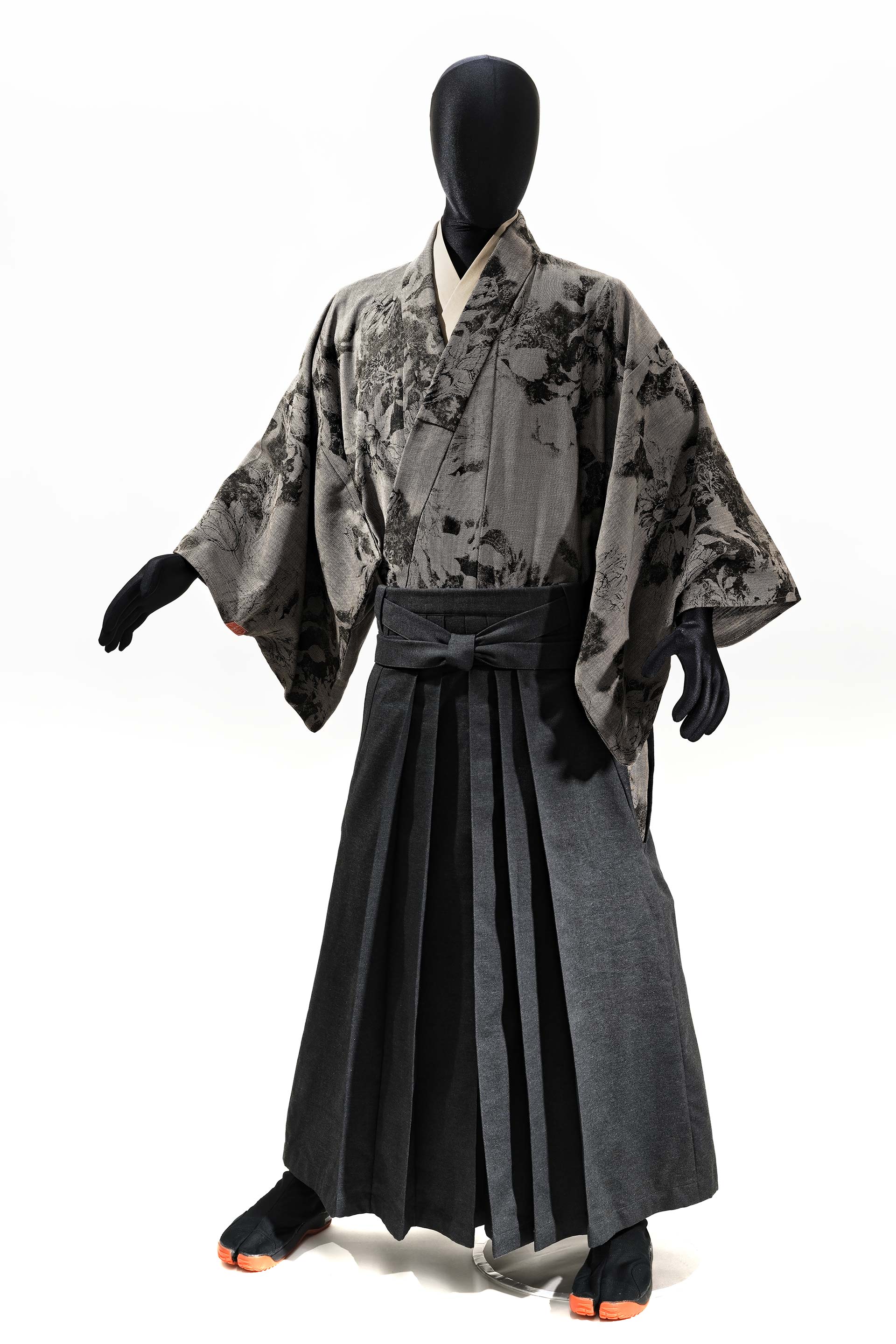 This SAMURAI-ZOROYE is coordinated by Dougi with monotone plant patterns and Hakama with rough wool and cotton.

Hakama is a rough cotton and wool fabric with a simple feel. Contrary to its impression, this item has a supple texture and is easy to handle. If you change the hem to "Ninja style", you will feel like a wild warrior.

Dougi of Grege also retains a rough cotton feel and has a wild texture. However, the whole plant pattern is as detailed as an illustrated book, and the unbalance between the texture and the pattern is stylish. From a distance, it looks like dirty processing and is cool. It goes well with the dark gray Hakama, and will be very useful for daily use. Of course, it is a combination that can produce high-grade hobbyists even as a casual wear.

In addition, the detachable inner collar that comes with Dougi is combined with a natural light brown to create a mature look. This item can be worn in a variety of ways without an inner layer. The brown Obi that peeks out at the side has a sense of unity. 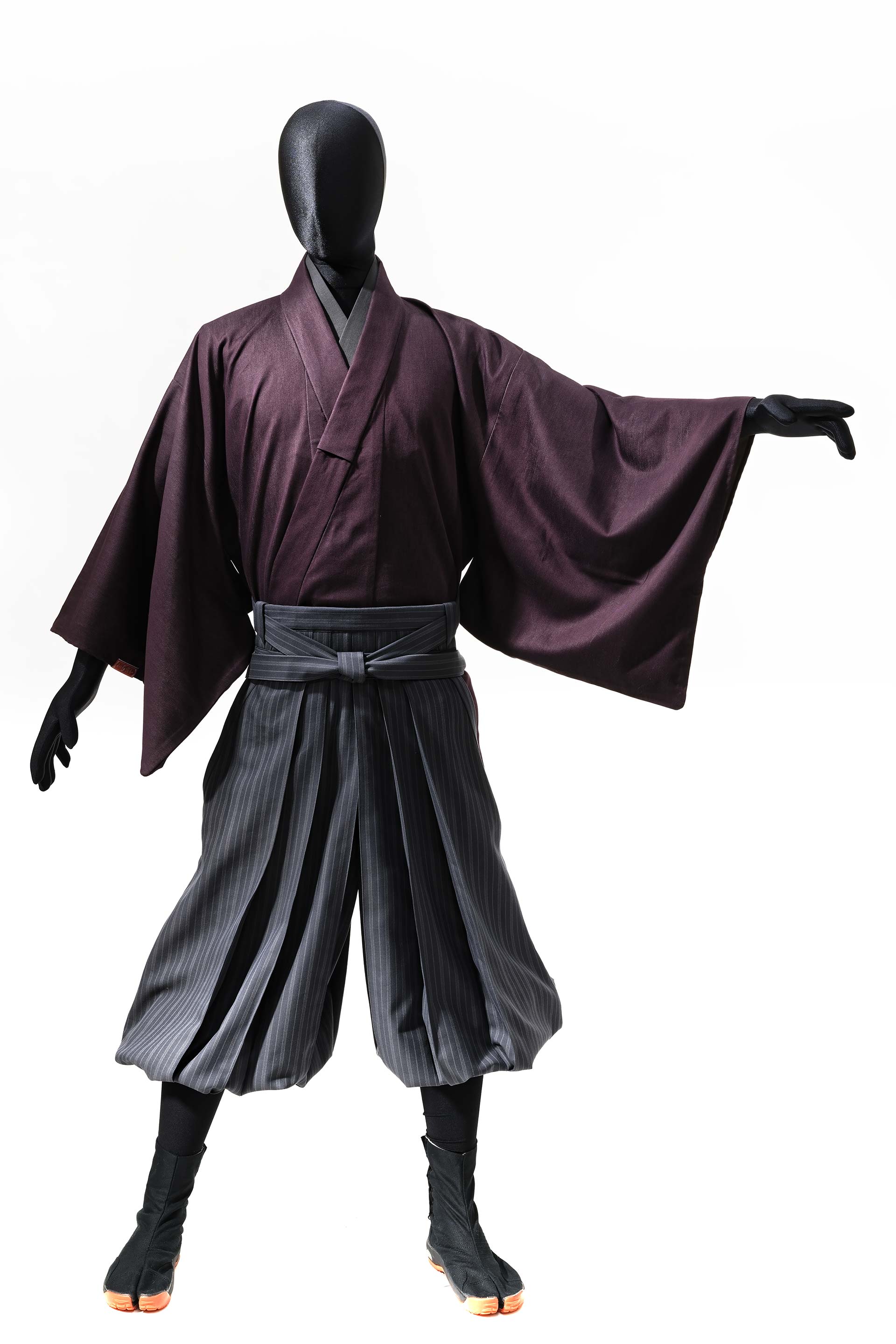 This SAMURAI-ZOROYE is a playful combination of the glossy Bordeaux color Dougi and the neat gray stripe Hakama.

The slightly lustrous Bordeaux Dougi is made of a blend of cotton and nylon, etc., and is a flexible and easy to handle material. The Bordeaux color that men like tickles a playful spirit, so this item will be useful in many ways.

In contrast to Dougi's playful spirit, the gray Hakama has an elegant and clean stripe. Made of cotton and wool, this item has a supple texture and is easy to handle. If the hem is "Ninja style", it looks like a grand sengoku daimyo.

In addition, the Dougi comes with a detachable inner collar (Grey to match with Hakama) to complete the look. The Obi that peeks out from the side is also gray, and the eyes are focused on the Dougi of the Bordeaux color. 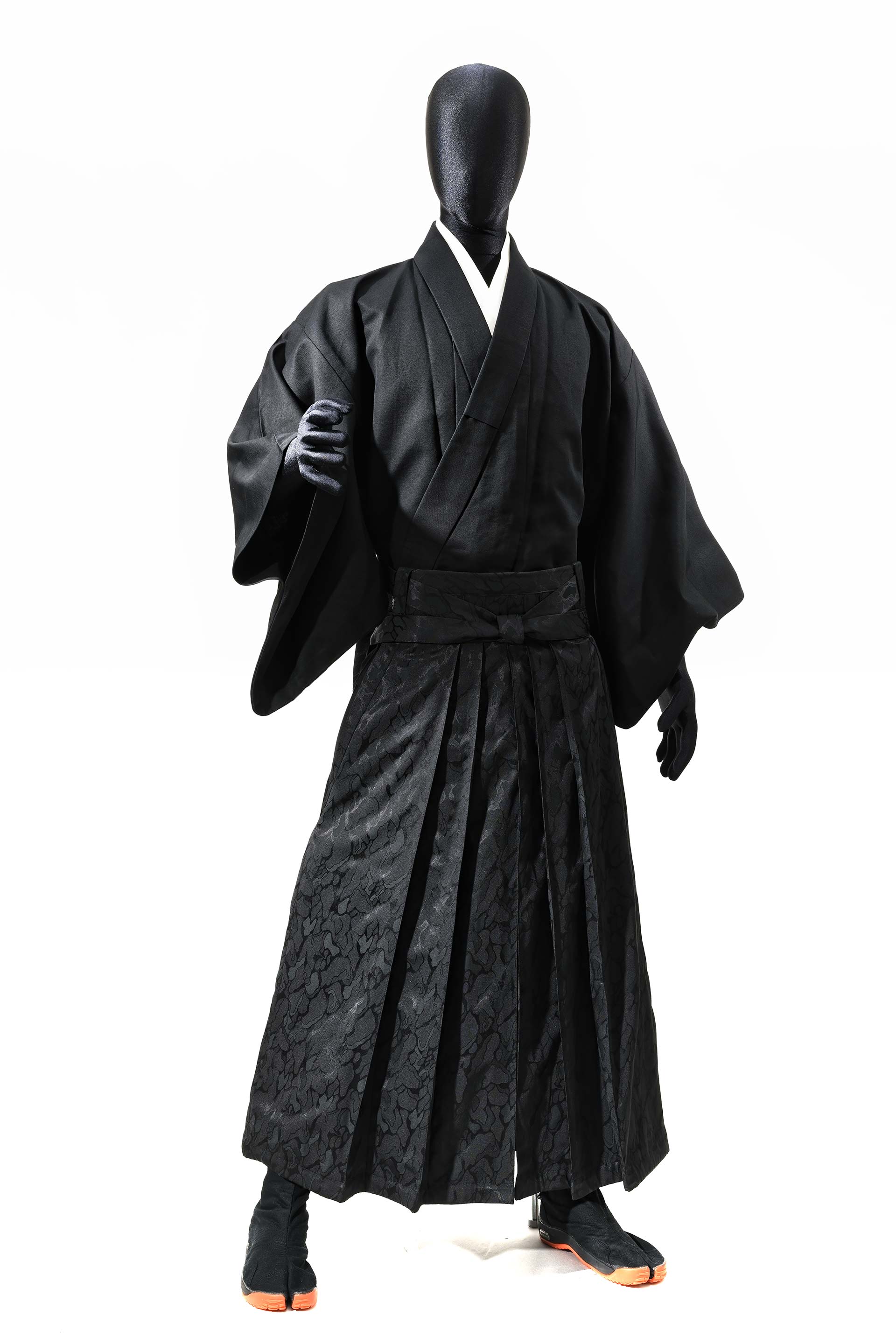 This SAMURAI-ZOROYE is a jet-black coordination with a Hakama woven with a mysterious oil film pattern and a Dougi of cotton hemp with a powerful texture.

The jet black Hakama has a woven pattern that makes use of three different patterns. An oil film-like handle on the water surface shows an alluring figure due to the reflection of light. The material is made of high quality polyester with a glamorous luster and firmness that stands out. Since this item is chic and elegant, it can be used for formal occasions. Moreover, it does not wrinkle easily even if the hem is tied. The "Ninja style" can be worn for more active and light styles.

The jet-black Dougi is also slightly shiny, tightly woven and glossy. The simple texture of hemp is mixed with this item, giving it a strong, masculine feel.

The matching gray Obi and the removable inner collar also serve as an elegant accent. 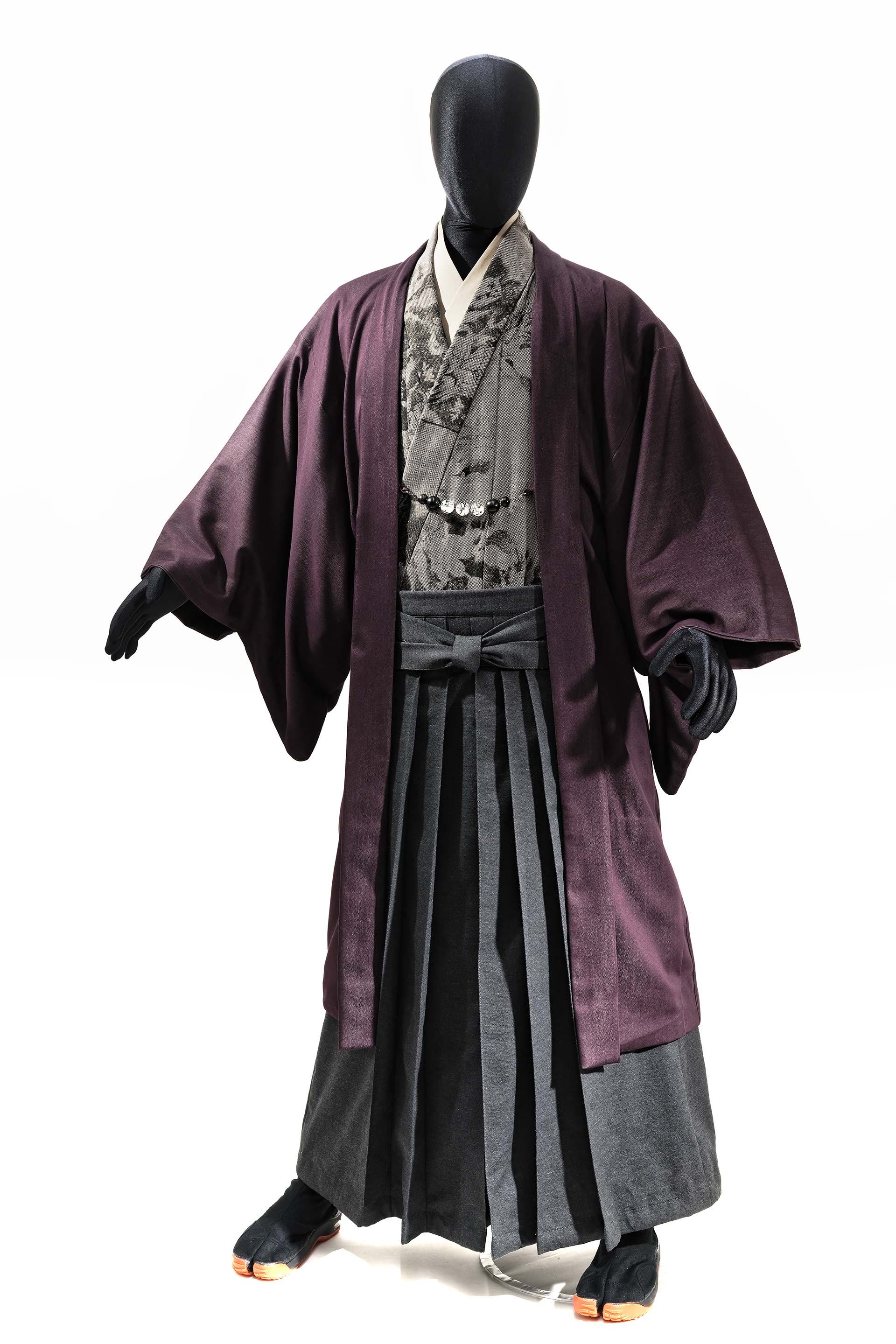 The Haori of Bordeaux is sexy. Ensemble made of the same material as "SZSS 20 04: Bordeaux's DOUGI".

This is already sold out. Please look forward to the next [SAMURAI ZOROYE] CATALOG.

Haori also appears from time to time in the [SAMURAI ZOROYE] series. Haori is a classic Japanese dress. This item is characterized by its length and the playful colors that men like. Since this item is plain, it is easy to match and has a mysterious look. Simple and easy to handle single tailoring made of supple cotton mixed with nylon. It is durable enough for daily use, and has an almighty finish that can be used when going out.

As an accessory, it is accented with a Kaname-dama [Hook] made of buffalo horn beads. Each item is handmade..